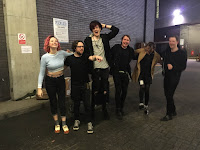 I think it's funny that we always consider spring a new beginning. When the evenings show me how much further they can stretch the light, I don't think 'ah, it's lighter, like it was in October'. I think that this is a miraculous and brand new thing.

I'm grateful to February for its four short weeks.

I spent the first half of the month counting down to the day where I could set my out of office email and bask in annual leave and a few days of escapism joining Bry on his UK tour. I got a three and a half hour coach from London to Cardiff, and managed 3 hours and 10 minutes before throwing up in its toilet closet. I got to have lunch with my in-laws and surprise Bry with their presence at his show. I got to watch Danny Gruff and Tessa Violet play their great songs, and I got to dance to British indie rock then eat panda-shaped birthday cake at 3am.

I do worry I'm falling into an old habit. I'm still counting down to a point in the future where I'll have everything I want. And yet, here in the present, I'm doing nothing to make everything I want happen. The advice from a Fulbright scholar in my third-last week of university rings in my ears. 'I always used to say, don't worry: Future Self will take care of it'. She was talking about writing essays. I don't think my future self can cram all my hopes and dreams the night before they're due.

I bookended the month with Hacksaw Ridge and Lion, loving both for different reasons. I got better at making time for stories in February - whether they were mine or someone else's. I kept watching Girls on those evenings spent at home alone, and kept asking myself why I was watching it. Sometimes one of the characters will vocalise an ugly, selfish thought I've played in my head and it makes me want to turn it off forever. I read 'The Hate U Give', a stunning debut novel from Angie Thomas. It was a fitting novel to read during US Black History Month, and I'd highly recommend it.

Okay. A short post for a short month. I look forward to March, filled with even more light.

Yours, full of spaghetti,
Candice
Posted by Unknown at Sunday, March 05, 2017

Email ThisBlogThis!Share to TwitterShare to FacebookShare to Pinterest
Labels: 23, blog, candice, candysomething, life, light, march, month, spring, this is where I'm at, tour, twenty something, work