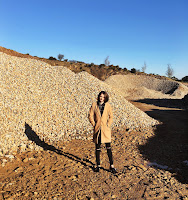 It's a common theme in these monthly musings but really, I don't like wishing time away. When life hands you a month containing five Mondays, though...

I'll pick up where I left off: spooled up in my mum's armchair as the clock struck midnight. I gave Jools Holland and co another half hour, then went to bed with a hot water bottle and thought about how I really wasn't feeling it this year. You know, a New Year. Capital N capital Y. Every year, I have the knowledge that time is a construct and you could get excited about the changing of months or the changing of weeks if you really wanted to. And yet, most years, I still get swept up in the magic of it. A new parting greeting for strangers. Putting everything you consumed over the past twelve months into a competition before academies and guilds get the chance to. [Best movie I saw last year was 'Spotlight'. Book - 'The Girls' by Emma Cline. Album 'Bry' by Bry.] And because I married someone who's always trying to wrestle experiences out of life, our group of friends is often subject to Worst moment of your year? Best new person you met this year? Most memorable trip of the year? questions.

Something about knowing I wouldn't be able to differentiate between the first week of December and the first week of January unsettled me. It doesn't feel like there's time to adopt some new activity in my routine. I don't feel awake enough to work on self-improvement. I'm giving myself a pass. I'm going to keep on keeping on, and once the days are longer and SAD is behind me, then I'll think about having a fresh start.

Of course, you can refuse to change anything about your life, and then watch the world's life change irrepairably. I'm trying my best to pay attention to politics, not just in the US, but also at home in Northern Ireland where the lives of the people I grew up with are affected by an unravelling government. I want to be better, I want to be more informed, I want to set aside time to helping. Don't call those resolutions.

While women worldwide marched, I conquered my only serious resolution by going home to see my parents. I think a lot of my frustration and low moods over the past five months came from not being able to recharge and check in with my folks and my Shetland pony. I visited a stone quarry and reconnected with my horse dentist - getting a week of back pain in return. I looked at photos of my friends in various cities protesting for their rights. Although being home is the purest way of being myself, I did get that teenage yearning; that if I want to partake and make any sort of change, I have to leave it behind. I have to stick to the city.

I kicked off the year by seeing The Kite Runner in the West End. I fell in love with the film and the book a few years ago, and it seems like such a timely story given that a lot of the ugly racism we're seeing stems from not understanding one another. In the cinema, I watched and loved La La Land and Hidden Figures. My first book of the year was Stephen King's On Writing.

February is a short, unassuming kind of month and I like that. You don't expect it to be warmer. You don't expect anything dramatic to happen. We're just spinning around, posing in a mirror, trying 2017 on for size.

Yours, five months in,
Candice
Posted by Unknown at Tuesday, February 07, 2017 No comments: