This Is Where I'm At | July 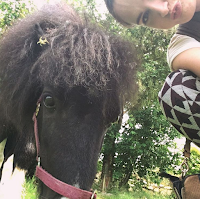 I think I've always been very good at giving off the impression I work very hard. Sure, I may be partial to what we now call 'Impostor Syndrome', but this confession is still mostly valid. I succeeded academically because I have a good memory for information and a decent affinity for words and numbers. I felt so much guilt as a teenager, given study leave around this time of year and spending the vast majority of it making coffee and listening to Abbey Road on repeat. I started working at my first job aged thirteen, and despite losing every Saturday lie-in my teenage self might've known, it was more fun than work for the most part. I have drifted through the past few years of my life doing enough but rarely exhausting myself to go above or beyond.

In June, I worked hard. For two weeks I worked two jobs and walked through the doors of a hospital ward as soon as visiting hour began. I completed the necessary paperwork and phone calls one has to do when moving house. I got to know exhaustion though had the luxury of knowing it was (probably) only temporary.

I look back of the global events that happened in June and they're knotted up with memories of morphine buttons and being put on hold and reluctant overtime. My dad had little contact with TV, radio or newspapers whilst in hospital, and I found myself in the constant position of stony-faced newsreader. A singer called Christina Grimmie was murdered last night. Fifty people were shot in a nightclub in Orlando. Jo Cox was murdered in broad daylight. These horrific instances hit me deeply, despite feeling like I was too tired to properly listen and properly care.

Right now, I'm in a new place. I find myself very aware of my accent and that I need to repeat certain vowels when I'm on the phone. I don't have a job, yet, though trying to find one reminds me that despite feeling like I have never really worked hard - June excluded - I have achieved a lot. I like my CV. I like my accent. I like this house.