Where do you go when you go quiet? 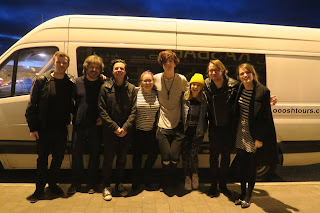 This was a brief period in mid-April where I felt like I knew what I was doing and I had a goal to work towards. Needless to say, it didn't last long.

April began with a first shift in a new job, only two weeks after another first shift in another new job, and I'm just getting some final paperwork completed before starting another job in May. I didn't have time to be (too) overwhelmed by the new job because the following day I jumped on a plane to Manchester to join the Bry tour for a few days.

The tour spanned a whole month, but I only managed a few days in England and then all the Irish shows. The in-between was a sick week involving a contagious illness and Netflix that I'd rather not repeat. I can't imagine what this month would have looked like/felt like had it not been for those stolen days and evenings of music and laughter and silliness. I will admit (in this quiet, unseen place) to have been moved to tears on more than one occasion during my stints. Yes, hiding at the merch table using t-shirts to dry my eyes. The horror. In all seriousness, I am so proud of Bry for pulling off an incredible run of shows, and on the drive back from our last show in Limerick, I found myself unable to put into words how much being around the people pictured above felt like home.

I had somewhat of an epiphany on the flight back to Belfast after the London show, and it provided me with some clarity and a goal to work towards: a reason to put in the hours at these crappy jobs because now they had a purpose. Unfortunately, I received some bad news just before the Dublin show, and suddenly end goals and endings and pretty much everything did nothing but incite dread. I apologise for being vague. It's just if these blog posts are for me - a chronicle of memories for my future self- then it's not worth writing down the kind of life turns that I'm not going to forget.

I ended the month sat at the river I sat at the night before my A-Level results landed at my old school. The one I sat at on summer evenings with four-legged companions right through every year of my childhood. I held a hand and I inhaled and mustered up the energy to come back to the city. Back to the in-between. Back to the retail anxiety. Back to planning the beyond.

April, you were an ache stippled with loveliness. You were customers and you were gig-goers, you were sunshine and hail, and I think one day I'll look back and see you as a bridge. I once met a boy and took him to the river I'd sat at for so many years and he said have you never thought of crossing it?

This month's movies were The Jungle Book, Captain America: Civil War and Eye in the Sky. I liked all three, but the latter was the stand-out - partially because knowing it was Alan Rickman's final performance meant I didn't take my eyes off the screen, but mainly because it was just wonderfully paced and really pulled on ideas of morality. I ploughed through half of Donna Tartt's The Little Friend but ran out of steam... I'll get back to it. I switched to CJ Flood's Nightwanderers which is released in June and finished it in a few days. It's a nice story, but it didn't fully pull me in. I watched the entirety of Jane The Virgin during my sick week, and really loved it. It was playful and quirky-ridiculous but exactly what I needed and I am very excited for Season 2.

Yours, resigned,
Candice
Posted by Unknown at Tuesday, May 03, 2016 No comments: