This Is Where I'm At | April 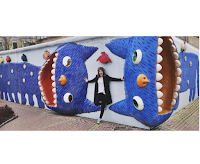 I don't remember which quotation on foolery I went with this time last year, but this year I nod to one of my favourite 2013 films, Begin Again. It means a lot to me, for layers of different reasons, but this week I've just been craving what Keira Knightley's Gretta has for the most part of the movie: a city, a goal, a scruffy chic wardrobe and an outpouring of creativity.

I'm always relieved when March is over and I have weathered another winter. My dad's birthday is in late March, this year falling on Easter Sunday, and I saw both my parents a few days beforehand for a lovely day spent roaming around two local museums. Those shared moments mean so much to me, and it's weird to be the driver; the person who researches the activity and then spends a lot of the time there ensuring my parents are having a good time. Role reversals! But they always pay for lunch.

My travels in March took me to Ukraine, its capital Kiev a source of fascination for myself and Bry since watching Winter on Fire on Netflix a few months ago. We spent International Women's Day there and it's celebrated by seemingly everyone, the tradition being that men buy the women in their lives flowers, so it felt like a Valentine's deja vu.

I'd been applying for jobs so devoutly in February, and was becoming a bit frantic by the time I got back from Ukraine, but thankfully I was able to pick up one 'immediate start' kind of job and then another retail job later in the month - I actually did my first shift today. Neither of them are forever jobs, but I feel lucky to be given a shot and to spruce up my (really quite pitiful) CV. With all of these changes, it was a weird and anxious kind of month, with my brain functioning as irrationally as it always does. Onward.

Finally, with the release of the first single from Bry's debut album happening tomorrow, he has been getting lots of radio play, which is very exciting to most people but mainly my mother. I'm off to England tomorrow to join the tour for a few days. Hope to see you there.

If you missed it, this video with my friend Irma went down really well. I saw 10 Cloverfield Lane and it nearly made me throw up out of sheer tension, but I loved it. I've been listening to The 1975's album, like every other boring white girl in the world, but today's soundtrack is Carole King's Tapestry album... if you want to expand on the sheer joy the Gilmore Girls' theme brings, it's probably a good place to start.

Yours, taxed,
Candice
Posted by Unknown at Saturday, April 02, 2016