I love Harry Potter, friends. I love its magnitude, its effects on literature and charity and pop culture. But it surprises some people to find out that everything succeeding the release of the final film installment has gone right over my head. I get frustrated by new additions to the story or changes or cover-ups. I want the story to be left alone. I am a firm believer in the 'The End'. I could elaborate on this but instead I want to link you to a piece of criticism by Dr. Adrienne Keene, in response to JK Rowling's History of Magic in North America series that's being published on Pottermore. This response is composed and informed and well worth a read.


Check out the trailer for The Witch, a film I saw on a whim last night. It's rated 15 and it's a psychological horror, so consider that before watching the above video. The film, directed by Robert Eggers, screened at Sundance earlier this year, and was released in the UK this weekend. It's the story of a Puritan family in 17th century New England, who are forced to leave their plantation and set up a farm in the middle of bloody nowhere. What follows is an incredible performance from a young newcomer, Anya Taylor-Joy, as tragedies begin happening and the family's faith is tested as suspicion of daughter Thomasin (Taylor-Joy) being a witch is voiced. It's void of jump-scares and melodrama, but instead relies on insidious moments and an excellent soundtrack. My knowledge of witches comes from Macbeth, The Crucible and er... Sabrina, but true followers of witch trials' place in Christian history will love this. 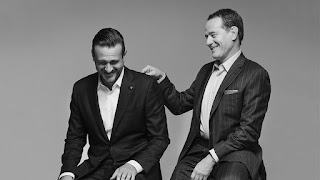 I've been working my way through Variety's Actors On Actors series since last month when I discovered them pre-Oscars. It's a series of interviews where actors who have appeared in some of this year's Academy Awards buzz films interview each other. Because of this, it's very white, but there's some really interesting insight if you have the time to watch them in full. I've linked the Bryan Cranston/Jason Segel one, even thought theirs are among the few films I haven't seen [Trumbo and The End of the Tour]. I'm just so fond of Bryan Cranston and he comes across as not only hilarious, but a very sincere listener/asker.


Finally, some quick links! Little Green Cars' Easier Day is the Saturday soundtrack in our house. I adore Clémence Poésy, she did a speedy interview in i-D and it's worth clicking on for the accompanying photo alone. I have my eye on Miranda July's new short story collection, No One Belongs Here More Than You, mainly because it's just the right shade of yellow.