In my usual habit of personifying everything, I feel like February is a bit of a troublemaker. It knows how much effort it takes kids at school to learn to spell its name. 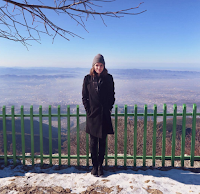 Sitting down to reflect on January has surprised me by how much I actually did last month, and I'm left pondering why it feels like I did very little. Anyone I've spoken to over the past few days has had the same thank God response to seeing January end. It feels very much like we've weathered a storm in more ways than one. I know every month is a month of loss for someone, somewhere. But when we mourn as a collective, it feels particularly overwhelming at the beginning of a new year. Grief pairs itself with gale-force winds and tries to huff, and puff, and blow your house down. I suppose, to be hopelessly selfish for a second, the loss of David Bowie, Alan Rickman and dear Terry Wogan reminds me that when you share a part of yourself with the world, be it music, film or radio, those things outlive you. People can hold on to those things. This, I imagine, is little consolidation for families who lose the person beyond those artistic fragments. But for me, it's a huge comfort.

We managed to rack up not one but two instances of couples bowling in January, and I feel like 2016 is going to be my year as an amateur-flukey-one strike in a blue moon-semi-pro bowler.

Our first trip of the month brought us to Rome, Vatican City, Tunisia and Malta. I felt suitably Olsen Twin in Rome and became a bit smitten with minuscule Malta and its cheerful residents. Later, we clocked Montenegro, Serbia and Albania, which ranked much higher on the stress scale. I hope you've been enjoying the travel videos. I think I was a little too affected by a recent airbus ad that said 'you are where you go'. I, generally, don't choose where we go on these trips. And when I ask myself where I want to go, to try and figure out who exactly I might be, I can't come up with an answer.

I applied for a couple of jobs as soon as the Christmas buzz was over, and interviewed for one in the last week of January. I hoped to conclude this post with news of kicking off February with newly-found employment. Alas, I am still waiting on a call.

I really want to make an effort to spend a little more time finishing these posts off with some music/film/book recommendations over the next 11 months.
First up, it's Julia Nunes' Make Out. The music video for my favourite song on her album was released in early January and I really dig it. It's super inclusive and she has a girl band and a crop top and her trademark ukulele. Heart eyes.
It's been a slow reading month for me, but I let myself take my time to digest a 600 page Murakami novel to kick off the year. Some of you might know as me as someone who dog-ears pages that I find particularly resonate with me, and I pretty much folded every other page in this beautiful book. I mentioned already that January has been a month of loss... I really felt myself somewhere within that loss, within those pages, within my mind. You can buy The Wind-Up Bird Chronicle here.
Finally, this month's movie round-up is Room, The Revenant, The Big Short and Spotlight. Buzz buzz Oscar buzz. I'm drawn to the chronicling of recent history that the latter two brought, and there was something pleasantly morose about leaving the January rain outside for a couple of hours to wallow in the emotions of the former two.