This Is Where I'm At | January 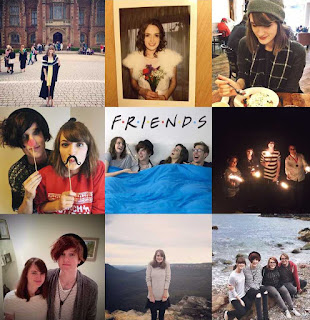 I've started and restarted this post many times now, because it feels like the beginning to the beginning of a year musing is very important. Alas, this is what you're getting instead.

I think December was quite slow, perhaps because the last December in my mind was one that passed in a blink of buying bouquets and decorations and waterproof mascara. When I say it doesn't feel like I've been married for a year, I am not just churning out a banality; it really does not feel like twelve months have passed. My wedding day was one of the best, most fun days of my life. 2015 wasn't too bad, either.

I'm going to film my annual recap of the year, and give a full rundown of everything I did. Until then, all that's left to do is ponder a little and maybe learn something.

So. Much. Travelling. This blog has been an excellent way of documenting those travels month-by-month, and it's a little scary that I had to revisit it as not to forget a country before filming that video. Travelling is part of our 'jobs'. It's important for our YouTube channel, it's important for us to go and see as much as the world as possible before our lifestyle changes and that's no longer an option. It's stressful and frantic (the longest we spent in one country in 2015 can't have been more than 4 days) but it's also exciting and educational and remains in my mind, for now, the best way to spend my money.

In this video, I talk about feeling like you've missed the boat in your early twenties. If you haven't found a passion or a talent, it can feel too late to find one and become good enough at that thing to rival those who are already good at it. Finishing university was a big factor in how frequently I think about this kind of thing. I learned so much: not just about authors and genres and history, but about how to learn, how to read, how to analyse, and what bigger conversation my (still totally imaginary) future novel will enter into. I felt so at ease within a classroom, a lecture hall, a coffee shop, for three whole years. Then I spent six months in different surroundings with different people, with no particular goal. 2015 had multiple endings and beginnings, not just the bookend ones.

I hope to look back on 2015 in the coming months as a year of building blocks. A degree. A wonderful internship. Countless 'behind the scenes' things that I don't share online; things relating to my relationship, the Open University Fiction Writing course, the job applications, the late night DMC with friend conversations...
I hope to build on all of these things and take them somewhere. Maybe that's a healthier approach to the new year rather than starting lots of things afresh.

I've kicked off January with my favourite people in the world. On the 30th of December, I went to see my brother's band play and he and I joked and sang our way through 'The Fairytale of New York' as our parents looked on. I rang in the New Year with my best friends, and we cracked open confetti cannons and screamed at the sea. Before January had been around for long enough for me to begin writing the date correctly, I did something bold and fun and got a little tattoo. There's a video here. One of my biggest pet peeves is being put in a box; to have people assume that I am easy to work out, that I'll always behave a certain way. I hope to surprise myself more than I surprise other people in the next twelve months.