This Is Where I'm At | November

So, for the first time since I started documenting my months like this, I completely forgot/didn't realise we were in a new month. Perhaps November is shy and unassuming, wandering in without making a fuss, or perhaps the temperature has been so peculiarly lovely outside that I forgot it's not late summer anymore. 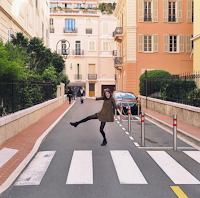 Weather small talk over. October has been and gone. It's a long old month, October. Maybe because the focus is all on the latter end of it and I'm not a big Halloween fan so the whole month just consists of me hoping it never arrives. It did arrive and it was fine, more on that in a second.

On October 1st I was on a plane. Bry and I flew to Thessaloniki in Greece, then spent a couple of days travelling in Macedonia and Kosovo. We mainly stuck to cities, but travelling by land meant we took in a lot of great scenery on the way. On our return home, I had to spend the night in Gatwick airport on my own; doing so always reminds me that in the great 'Which Tom Hanks Movie Are You?' quiz of life, I am not The Terminal. [Funny sidenote: a song by The Castaways came on the radio the second I typed that.]

The following weekend was spent a little bit closer to home, in a cottage in Leitrim, Ireland, with our favourite couple, Gary and Jen. Self-catering accommodation somewhere in Ireland is how all my childhood holidays played out, so I felt very at home. I didn't tweet for the entire weekend, but we took some beautiful photos purely for the purpose of posting them on Instagram and stuck to our strict YouTube upload time. However, we didn't turn on the TV for the whole weekend and exhausted every question card of not one but two board games. It's about balance, right?

I got to spend some time with my parents; something I'll be prioritising over travel for the rest of the year. I turned back clocks in their car and on their phones and wondered if I really do have my dad's seasonal affective disorder, or if I just hate leaving my bed on cold, dark mornings.
I completed the second month of my internship in Belfast, and in doing so am also slowly compiling a mental list of the best soups in the city.

And so October exits in flames; flames in the sky, flames on the ground, flames on a sparkler at the end of my hand for the first time in a long time. Jen made us look like mimes, and I did my best to hide the cold/flu thing I picked up a couple of days before. I don't usually get sick, and I don't usually wear face paint. Onward to Christmas, I say!

November will largely be a solo month, one of those where I get to pretend I live alone and I never make the bed and I sometimes use the same plate, mug and glass so I only ever wash up the same three items. There are sometimes TV adverts reminding you to check on elderly neighbours when winter rolls around. Do that, but also check on the strange girls who blare Irish folk music and only use three dishes.