Posting about books on this blog is new to me! I'm excited that my first foray into writing about writing is to celebrate four books by women, detailing their four very different stories in different ways. 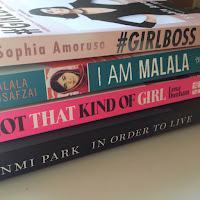 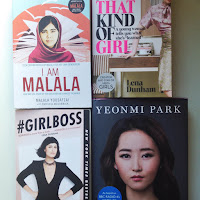 I Am Malala How One Girl Stood Up For Education and Changed the World - Malala Yousafzai with Patricia McCormick. 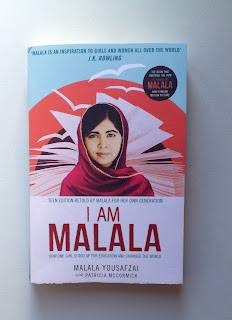 Bit of a publishing history, first. I Am Malala: The Girl Who Stood Up for Education and Was Shot by the Taliban was published in 2013, just one year after Malala made headlines all over the world. That book was written with Christina Lamb. A young reader's edition (the one I have) was published one year later. This edition is a re-release which promotes the upcoming film - 'He Named Me Malala'. It includes an epilogue which details Malala's life and work in the period after the first book, and as it is intended for young people, has a great Q&A and some discussion points at the end.
I read this book in one sitting and it was clear, sad, inspiring and triumphant. Full review on my channel soon! [x] 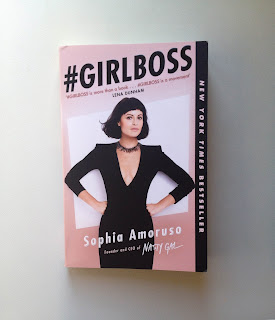 Hmm, an author who proclaims very early on in this book that it is not a feminist manifesto. '#GIRLBOSS is a feminist book, and Nasty Gal is a feminist company in the sense that I encourage you, as a girl, to be who you want and do what you want. But I'm not here calling us "womyn" and blaming men for any of my struggles along the way'. Amoruso is the founder and CEO of clothing company Nasty Gal, and admittedly, I was a little disappointed that her attitude seems to be 'women can do anything if they work hard enough', a la Taylor Swift before she met Lena Dunham. I am about a third of the way through this book, and would have appreciated a little nod to America's wage-gap, or some acknowledgement of privilege, perhaps? HOWEVER, this book is still all about empowering women. Young women; those of us too young for 'Lean In' (it has a hashtag in the title, for goodness' sake.) So far, I'm enjoying Amoruso's honesty and coolness, but as far as serious career advice and inspiration go, I was hoping it would dig a little deeper. [x]


Not That Kind of Girl - Lena Dunham 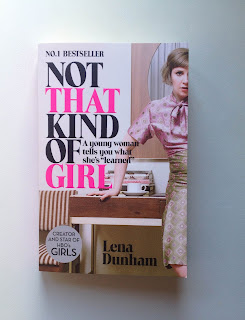 This garnered such a Marmite reaction from most of my friends that I was a little hesitant going into it. I have never watched Girls. I don't know anything about Lena Dunham. I read a memoir of a complete stranger. And it was funny, highly competently written, and absolutely unapologetically confessional. People have issues with this book, mainly to do with race - and those I can get behind- and then another odd one regarding a scene in the book about child Dunham and her little sister and some pebbles. That one was completely innocent. I was a bit indifferent to this, if I'm honest. I didn't really understand why I was reading Dunham's past food diary, a 'secret and humiliating document' that was actually neither to an outside eye. I have a lot of respect for Lena Dunham as an actress and a writer, but perhaps if I was more in touch with her work, I would feel more connected to her and therefore more connected to this book. [x]


In Order To Live - Yeonmi Park 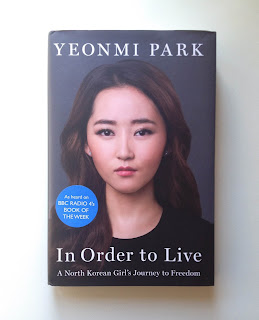 The only one of these books I haven't started!
'I wasn't dreaming of freedom when I escaped from North Korea. I didn't even know what it meant to be free. All I knew was that if my family stayed behind, we would probably die'.
Park Yeon-mi is a human right's activist who escaped her native North Korea when she was just a teenager. This hardback is her story, and I hope I find it as inspiring and educating as I found Malala's book. [x]

That's your lot! Thanks to Penguin for sending over the Park and Amoruso books, and to Hachette for I Am Malala. Not That Kind of Girl was purchased by me. Click on the little Xs if you want to purchase any of the books.

Email ThisBlogThis!Share to TwitterShare to FacebookShare to Pinterest
Labels: blog, books, candysomething, feminist, girlboss, i am malala, in order to live, non fiction, not that kind of girl, reviews, women, writers

This Is Where I'm At | October

Another late one this month, apologies! 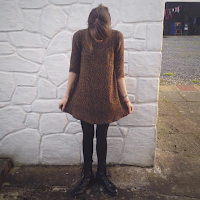 I write from a hotel room in Kosovo, kitted out to look like some sort of lavish palace from the past with fittings that are far too flimsy to be in my company. It kind of reminds me of old Disney movies where luxury could be created with a few brushstrokes.

We are back in Balkan Europe for a long weekend of trying to see lots of countries but ultimately feeling permanently tired, a bit confused and longing for our own bed. We've taken some beautiful train journeys and had some delicious yet outrageously inexpensive meals. These trips are always GO GO GO GO GO, and it's so nice to have a minute to do some writing and internet catch upping before another 6.30am alarm.

September started with a JOB, a REAL JOB. Okay, an internship, but a serious adult move if ever there was one. Some of you have followed this Twitter to see what my job entails but if you'd rather skip that, know I'm permanently surrounded by lots of CDs and lots of witty banter.

I said goodbye to summer with Electric Picnic, a music festival in Ireland that had miraculously beautiful weather and some beautiful music. Also a particularly handsome stripy singer who I happen to be married to. Bry's set was great and we just had a very lovely evening. More of those, please.

I then spent a solid week getting incredibly nervous about a wedding I had agreed to sing at, and roped Gary in to help me out by playing guitar. I can't even explain the nerves that come along with performing music in front of people, and I don't know if it's because that's just a really scary thing to do, or if it's a lasting effect of mean figures of musical authority in the past being nothing but discouraging. If you've ever got through a piano exam without bursting into tears, I applaud you. Anyway, no tears at the wedding (from me anyway) but never again!

I received a colouring book for adults this month and it got me thinking about mindfulness. I think it's been a mindful month where I've been more aware of my surroundings - working in Belfast and absorbing Culture Night helped - there have also been things on my mind; I'm always a bit half-present with my head somewhere else these days. And my beautiful 15 year old ginger sass cat, Tango, passed away, which is honestly more a peace of mind than anything, because I was worried she was in constant pain.

We wrapped up the month with a weekend in Dublin, where Gary got a tattoo and I felt ready to hand myself over to autumn and the inevitable Christmas countdown. I clocked too many miles last weekend, deciding to surprise my parents with my company for a Sunday afternoon before disappearing into the Blood moon a few hours later. (That sounds oddly supernatural but we'll go with it).

In September, I saw Everest and bawled but I would highly recommend it regardless, though the first half felt a bit oddly paced. I read a few books, Lena Dunham's Not That Kind of Girl and James' Dashner's The Maze Runner are the two that stand out, hopefully I'll get proper reviews up somewhere soon.

Time difference is not on my side, so I'll wrap this up. More blog posts in October, I promise.

Yours, lasagne-filled,
Candice
Posted by Unknown at Friday, October 02, 2015 3 comments: