Watching The Entirety of 'Unbreakable Kimmy Schmidt' in a Day

My main incentive for finishing my university assignments was being able to watch TV shows and movies without any guilt again. I've turned down so many box sets and movie recommendations from friends over the past month because as someone who only has TV for watching Netflix on, it's rare that I'll just watch one episode per week like the olden days. 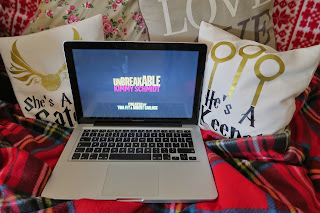 The main show I'd been holding out for is Netflix series 'Unbreakable Kimmy Schmidt', produced and written by Tina Fey (and Robert Carlock) and starring Ellie Kemper. First of all, Tina Fey's writing credits include Mean Girls, and secondly, Ellie Kemper adorabled up the fifth season of The Office, and I really wanted to see her in a starring role.

The premise of the show is that Kimmy and three other women have been kept in an underground bunker as part of a doomsday cult for 15 years, and upon rescue, Kimmy decides to go and live in the Big Apple of New York City. Doesn't that sound incredibly dark and serious? I promise it's not. The bunker is dealt with in a very lighthearted way, and the psychological repercussions are mild.

I sometimes collide with American TV shows and I just.don't.get.them. Shining examples include How I Met Your Mother and even New Girl. For its first episode, UKS didn't have me. It felt Nickelodeon, a blur of garish colours and caricatures over characters.

But then that awful feature on Netflix that makes the next episode start in 10 seconds if you don't click away happened. And I watched the entire season in (almost) a single sitting. I became really charmed by Titus (Tituss Burgess) and Jacqueline (Jane Krakowski). When it was good, it felt like Ugly Betty with witty, pop-culture snappiness. And at its worst, it never felt less than Nickelodeon shows for 12 year olds, which I enjoyed for many years well beyond the age of 12.

I got to know this show through Tumblr gifs which portrayed it as satirical on race and sexuality issues, and I felt that, but it was pretty restrained. Nothing problematic, but nothing ground-breaking. My favourite moments were the 'language barriers' between Kimmy, who didn't finish middle school, and 2015 New York. Despite being a victim of unspoken violence, her biggest hurdle seems to be figuring out which idioms to use.

To paint you a really good picture of my day consuming this show, I also had my first experience of Ben & Jerry's Dough-ble Impact. I'm a mess.

Let me know what series you've been watching lately so I can jump on the bandwagon! :)
Posted by Unknown at Monday, May 25, 2015